One of the most highly ranked National Parks in the States, make sure to add Yosemite National Park to your USA itinerary. With spectacular granite cliffs, great waterfalls and giant Sequoia trees, you will soon understand why it is so highly rated.

An important tip when visiting Yosemite is to make sure that you arrive early. Not only so that you can have a full day to make the most of this beautiful National Park, but also because it can get very busy, particularly during the summer months. We made the mistake of going on Memorial Day, however, fortunately we managed to arrive there early enough to beat the queue into the park and get a parking space. Although there is a car park near the visitor centre, this fills up very quickly and you will see many cars circling round and round waiting for a space. You may get lucky, but it is best to get there early. Alternatively, you can park a little further away (there are car parks all along the road towards the visitor centre) and get the free shuttle bus that runs throughout Yosemite Valley and stops at all the main viewpoints, lodgings and stores. 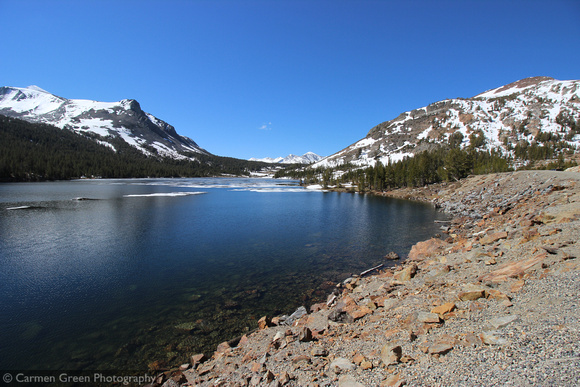 Bear in mind that if you are travelling in from the east of Yosemite, the main road to get to the National Park, Tioga Pass, tends to be closed during the winter due to snowfall. There is no set date for when it opens again; it is usually late Spring but can vary depending on the time it takes to clear snow off the roads. Therefore, it is advised that you check this website prior to your trip to avoid disappointment. From Lee Vining (the start of Tioga Pass), it takes about 2 hours to get to the Yosemite Valley visitor centre. While this may sound like a long drive, the time will fly by as you gaze out across snowy mountains, beautiful clear blue lakes, alpine meadows and dense pine forests. If you have the time, there are so many lovely places to stop at on route to Yosemite Valley such as Ellery Lake (above), Tenaya Lake and Tuolumne Meadows.

There are a number of places to stay at in Yosemite, however, these tend to get booked up quickly and are expensive due to the high demand. Therefore, we decided to stay in Mammoth Lakes before spending the day driving right across Yosemite, stopping at all the major sights then exiting at the western side of the park at Yosemite Forks and spending the night in Chowchilla.

No trip to Yosemite would be complete without stopping at one of the most iconic and probably most photographed viewpoint in the whole of the National Park. This spot provides an excellent overview of the park's towering granite cliffs including the Half Dome and El Capitan, cascading waterfalls and lush green pine forests. 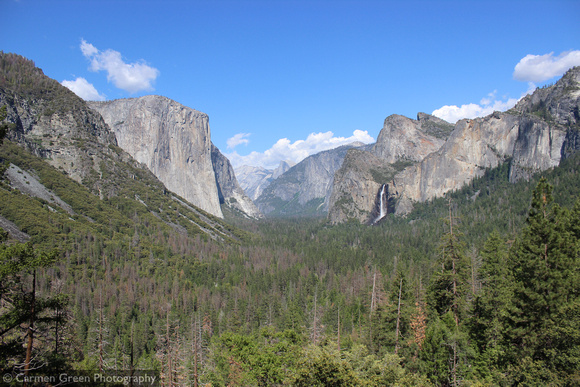 Yosemite National Park is home to thousands of waterfalls. One of the main ones you have to see is Yosemite Falls (left). Comprising three separate waterfalls (Upper Yosemite Fall, Middle Cascades and Lower Yosemite Fall) and at a height of 2,425 ft, this is one of the highest waterfalls in North America! A short walking trail (approximately one mile loop) leads you from the shuttle bus stop right to the base of the waterfall. You can also hike to the top of this waterfall where I expect you would be rewarded with fantastic views. However, unfortunately we did not have enough time to do this.

Another spectacular waterfall to see is the Bridalveil Falls (right), so named due to the way the water falls; resembling a bride's veil blowing in the wind. This is one of the first ones that you will see as you enter Yosemite Valley and is only a short hike from the car park. 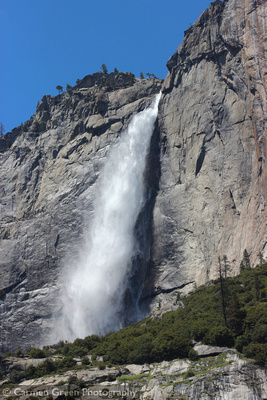 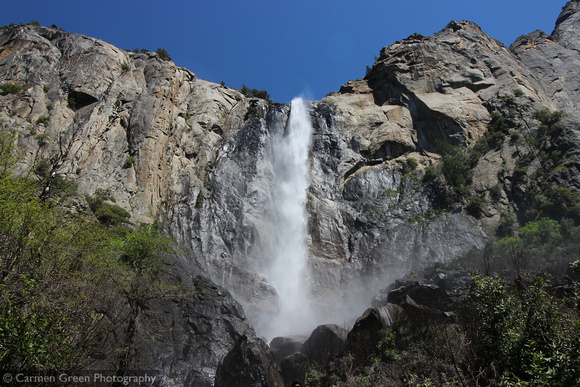 Despite the hour long drive from the visitor centre, it is well worth the journey up to Glacier Point. At a much higher vantage point than the Tunnel View, it offers an amazing panoramic view of the National Park and is also probably the best location to see the famous half dome. In addition, there are toilets at the top as well as a gift shop and cafe where you can buy much needed refreshments before descending back down the winding road. Bear in mind that due to heavy snowfall over the winter, the road up to Glacier Point is only open during the summer months. 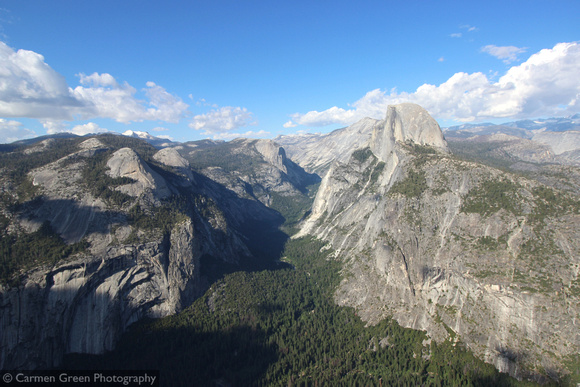 You are bound to encounter an abundance of wildlife while visiting Yosemite. Turkey vultures and ravens can be spotted circling high over the park for much of the day while numerous squirrels scurry in and around the visitor centre, mule deer creep through the forests and yellow-bellied marmots that burrow under piles of granite rock. Also, keep an eye out for bears! We were extremely fortunate to see a Black bear while on the trail back from Yosemite Falls. It was surprisingly very close to the paths, probably within 20ft of the many visitors that were passing by that day and completely oblivious to this large mammal. Despite seeing so many signs warning of bears in the park, we still cannot believe that we were lucky enough to see one of these fascinating animals. 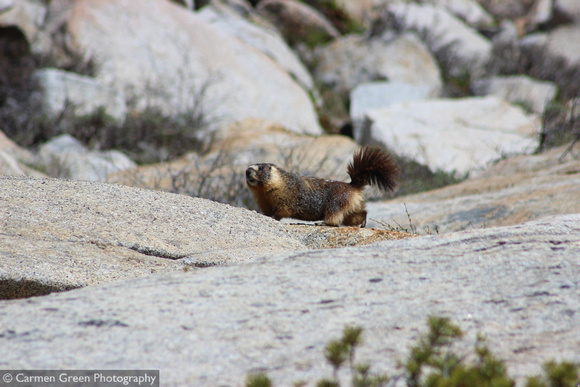 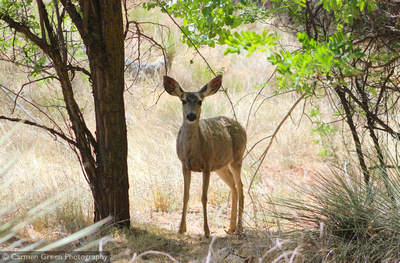 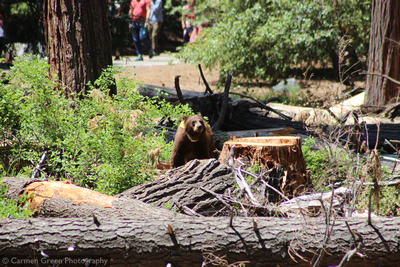 It isn't hard to see why people rave about Yosemite National Park so much. As long you carefully plan out your trip, you'll be rewarded with stunning scenery, fantastic hiking trails and unforgettable wildlife encounters. There is so much to see and do here - we will definitely be returning one day!