Situated only about 150km to the east of the capital of Antananarivo (Tana), Andasibe-Mantadia National Park is one of the most visited National Parks in Madagascar. The drive takes 3 to 4 hours form Tana, depending traffic, meaning that a visit can be carried out as a day trip from Tana although it is recommended that you spend at least 2 or 3 nights here to fully enjoy the amazing wildlife that Andasibe-Mantadia has to offer. The main attraction at this National Park is the indri and this is the main reason I wanted to visit. Known locally as the babakoto, the critically endangered indri is the largest lemur in the world and a frequent sight at Andasibe-Mantadia National Park. The National Park itself covers an area of approximately 154km² and consists primarily of two main areas: the smaller and more accessible Analamazoatra Special Reserve and the significantly largely Mantadia National Park. In addition, there are several other smaller reserves within the area including Réserve de Torotorofotsy and the locally run Parc Mitsinjo which are also worth visiting if you have the time.

The nearby town of Andasibe is quite small with few amenities but interesting to wander through. You'll pass various stalls selling a variety of items such as rice, beans, meat, beer and electronics. Later in the day, farmers herd their zebu through the village back to their pens and we even stopped to watch part of a football match between two local teams. Take note that there are no ATMs here so ensure to withdraw any money you will need for your stay in advance. If you are looking to go shopping for gifts, there are several little stalls selling crafts made by the local women. They sell the exact same products as the gift shop at the park office but at about half the price and I suspect the profits also go directly to the local people. There are numerous hotels to choose from in the area, all very accessible to the parks. I highly recommend staying at the relatively new Mantadia Lodge. Located at the top of a hill, the hotel offers stunning panoramic views of the surrounding rainforests and its proximity to the National Park means that you will can wake up to the sounds of indris calling in the distance. 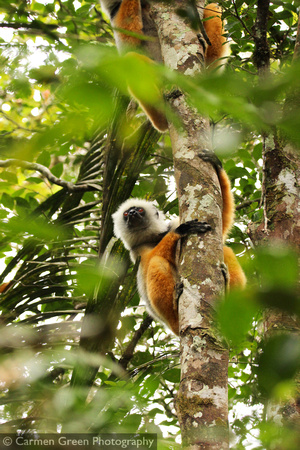 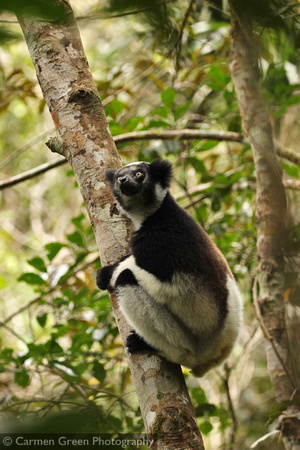 The park office for most of the reserves in the area can be found approximately halfway between the RN2 and Andasibe. There is also a decent information centre providing background information on the national park and its wildlife, particularly the indris as well as general information on Madagascar. You can choose from a small range of trails depending on what you want to see and the amount of time you would like to spend there. It is advised to head out in the morning (between 7 and 11am) to get the best sightings of the indris.

Not long after embarking on the trail we could already hear indris calling in the distance. Shortly after, we stumbled upon a couple of common brown lemurs, including one mother with her baby. There was an abundance of other wildlife including the birds: Madagascar bulbuls, magpie robins and the stunning paradise flycatcher as well as lesser vasa parrot, blue coua and common newtonia. Lined day geckos could often be found on the endemic Pandanus plants that are common in these rainforests and a group of colourful Diademed sifakas lept through the trees right past us. Then, after about an hour of walking, we finally encountered our first indris. After seeing so many photos and videos of this lemur, they were actually a lot smaller in real life than I imagined, not much bigger than a sifaka. This group of indris stayed with us for quite a while, leaping elegantly between the tree trunks and feeding. We were even lucky enough to have them call right in front of us! It was amazing; the volume of that call is just unreal! After only about 30 seconds the calling suddenly stopped and they resumed feeding. Despite being renowned for these booming calls, each group only actually does this for about 4 to 5 minutes a day. 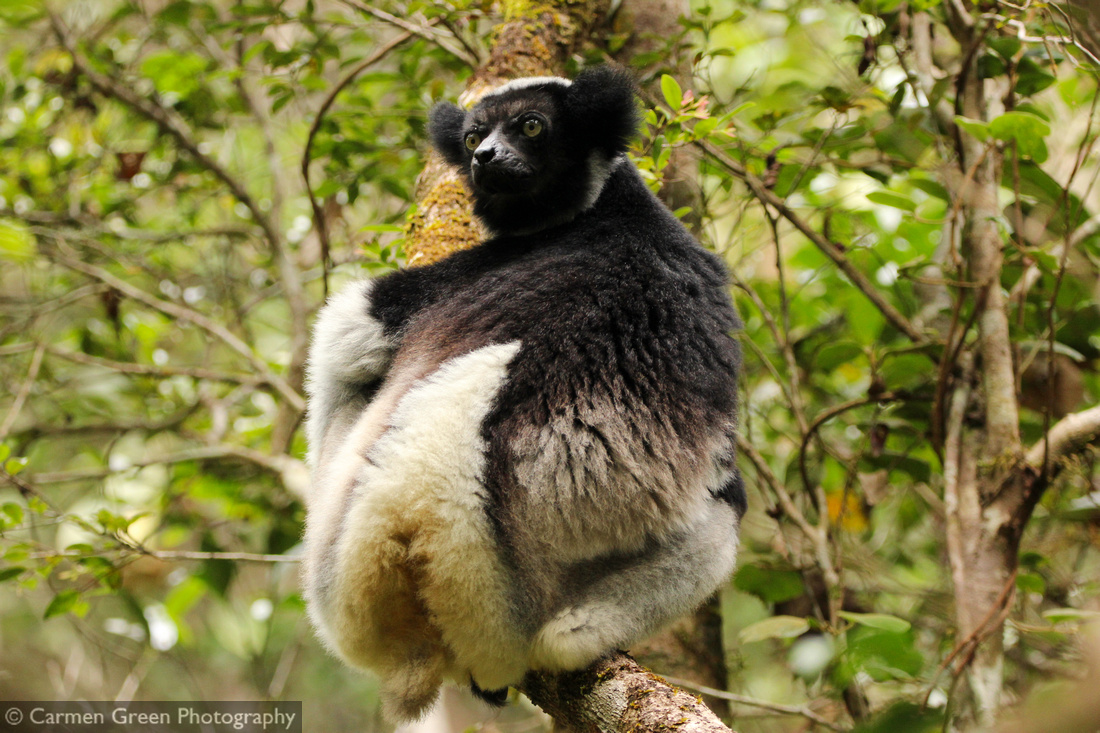 Towards the end of our hike, our guide also spotted the elusive mossy leaf-tailed gecko on one of the tree branches. This species is so well camouflaged, there is no way that we would have seen this without a guide! We were also fortunate to find a couple of funky looking giraffe-necked weevils, so named because of its elongated neck, much like that of a giraffe. After only a couple of hours at Analamazaotra Special Reserve, you will be sure to have a decent species list and fantastic encounters with the wildlife who inhabit this park. For me though, the indris were, without doubt, the highlight of the day, and in fact the entire trip. 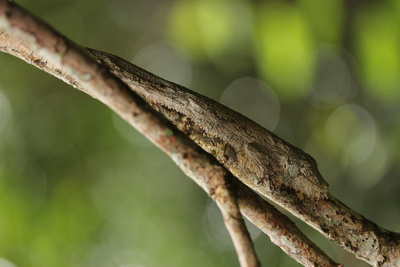 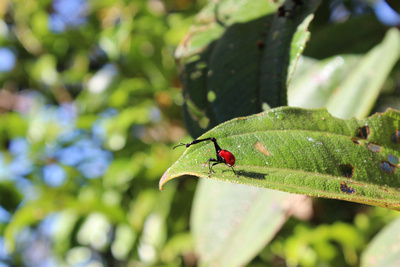 This National Park is located a good 1.5 hour drive away, depending on which trail head you start at and can only be reached via a bumpy dirt road so a 4x4 is essential. Bear in mind that you will still need to go to the main park office first in order to pay the park entrance fee and pick up your guide. Ideally you will need your own vehicle to transport you to the park, otherwise it may be possible to arrange transport with the park office. Although Mantadia National Park is slightly less accessible than the other parks in the region with trickier terrain to traverse, it definitely worth visiting in order to observe pristine primary rainforest that is home to additional species that have more specific habitat requirements and cannot be found in secondary rainforest. In addition, there are significantly fewer visitors to this park which improves your wildlife encounters. Even on the way up to the trail head, we observed an indri who was just chilling in a tree by the side of the road.

The highlight of the day here though was seeing black and white ruffed lemurs which can only be found in the Mantadia section of the national park. Having heard previously that they are difficult to locate in the forest since they have a large home range, we were pleasantly surprised to find two feeding high up in the trees above us. Other new species that we observed at Mantadia National Park included blue vanga, red front coua, Madagascar buzzard and our first snake of the trip: Liophidium rhodogaster. We also got to see another highly camouflaged mossy leaf-tailed gecko (although we still need a guide to point out this elusive species)! 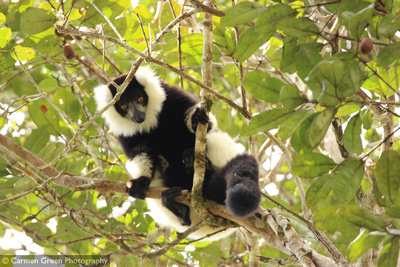 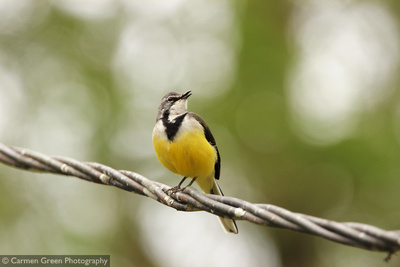 Do not leave the rainforest without going on a night walk. While you are not allowed to enter any of the national parks in Madagascar at night, you can see plenty of wild nocturnal animals outside of these protected areas. Parc Mitsinjo for example offer night walks, otherwise you can carry out your own night walk along the roadside. We brought our own high-powered headtorches so drove down to Mikalo Hotel and walked a couple of hundred metres down the road in search of nocturnal wildlife. We were in luck - we saw several pairs of bright eyes staring back us belonging to two Eastern woolly lemurs; one was just by the side of the road and another slightly further back in the rainforest. In addition, we spotted several chameleons, colourful frogs and numerous Madagascar nightjars and bats flying overheard. 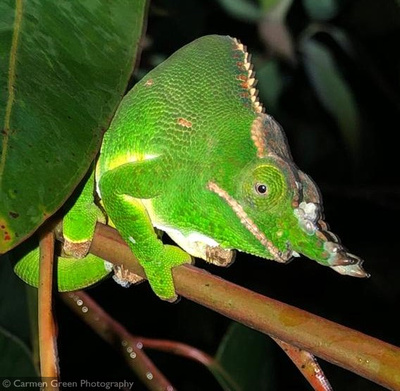 Andasibe-Mantadia National Park is a fantastic patch of rainforest and home to a huge diversity of wildlife. Being so close to Tana, there really is no reason why you shouldn't visit. The amazing indris alone makes the drive over there worthwhile. I don't think many things would beat having a group of them calling right in front of you!