Located just outside the town of Quepos, Manuel Antonio National Park is the smallest and one of the most-visited national parks in the whole country. With its stunning white sand beaches, beautiful forest and abundance of wildlife (with 109 species of mammal and 184 species of bird), it is not hard to see why it is so popular. This national park is probably one of the best places to go if you want to see sloths (and let's face it, who doesn't?). Almost as soon as we had we arrived and gotten out of our car, a friendly local called us over to point out a three-toed sloth within a tree outside of the park. The first of many sloths that day! 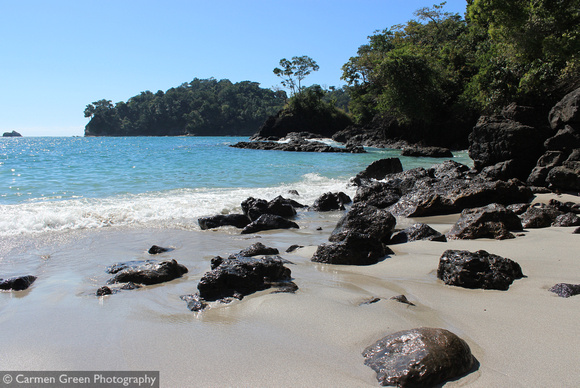 The main tip for visiting Manuel Antonio is to arrive early to beat the crowds. Being such a popular destination, it soon fills up and the beaches in particular can become very crowded. Therefore, try to arrive in the morning to make the most of the peace and quiet within the park. If you're driving in, there are several options for parking. If you get there early enough there is some parking directly outside of the park, otherwise, you can park quite cheaply at the side of the road by the beach, just down the road from the park. Also, there are no shops of cafes inside the park so make sure that you bring sufficient food and drink for the day. 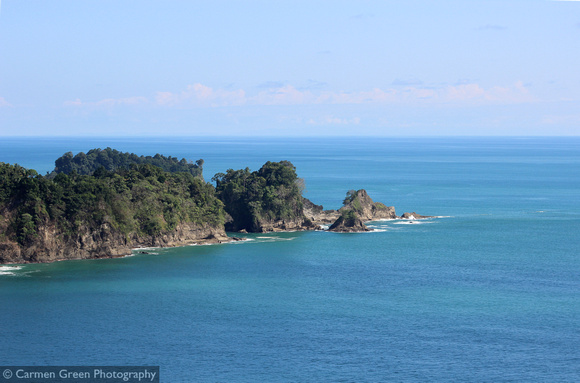 Despite its small size, there is still plenty to see and do here and you could easily spend a whole day wandering along the many trails through the forest and relaxing on one of several beaches. The trails vary in length and difficulty from nice, flat trails suitable for all ages to steeper inclines that take you to some high up lookout points. The Miradores Trail in particular leads you up a series of inclines and steps to some fantastic view points including one that looks out at Punta Serrucho, a narrow strip of jagged coastline jutting out into the ocean (above). 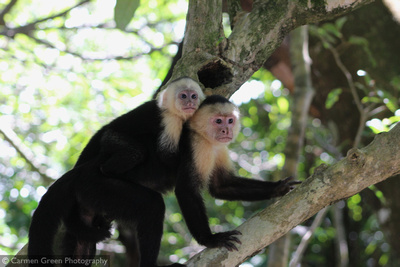 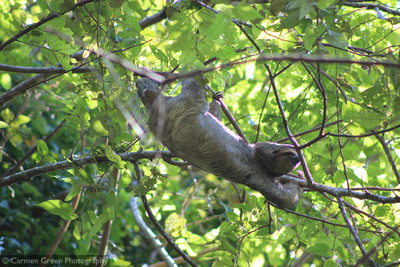 There is so much wildlife to be seen in such a small space. In addition to the many sloths that we saw, the highlights would probably have to be the cheeky White-headed Capuchin Monkeys that were in abundance around the beaches. They are not shy of humans so keep a close eye on your food and drinks! Other animals around the beach included Raccoons as well as Iguanas. Deeper within the forest, away from the busy beaches, White-nosed Coatis scurry through the undergrowth and we even saw a Central American Squirrel Monkey climbing through the trees. Also, look and listen out for the noisy Mantled Howler Monkeys who's loud howls can be heard throughout the forest. To increase your chances of seeing wildlife, you are able to hire an experienced guide at the main entrance of the park. However, as there is so much wildlife around, you're bound to see loads anyway, especially as most people within the National Park are very friendly and will point creatures out to you as you walk around. Although a guide would be useful if you were interested in spotting less obvious species such as insects, amphibians and reptiles. 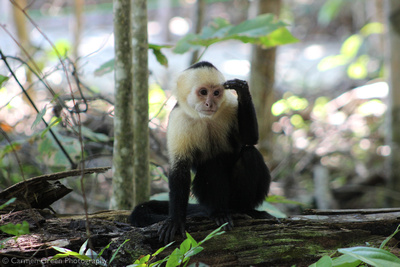 If you want to go somewhere to relax and spot a huge amount of wildlife without going very far, then Manuel Antonio National Park is the place to go. Despite being significantly busier than all of the other places we visited in Costa Rica, it is certainly well worth a visit, particularly if you are hoping to tick seeing a wild sloth off of your bucket list.